Our website was designed for a range of browsers. However, if you would like to use many of our latest and greatest features, please upgrade to a modern, fully supported browser.

Find the latest versions of our supported browsers.

You can also install Google Chrome Frame to better experience this site.

Not Too Young for Knee Replacement 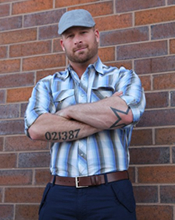 (New York, NY. Aug. 14, 2012). Barry Vargas is the picture of health, tall and athletic- looking. You’d never imagine the upbeat 34-year-old, an interior decorator and cast member of the new show “Shop this Room” on HGTV, would be a candidate for knee replacement. The surgery is generally performed on people in their sixties and older.

Osteoarthritis rarely sidelines people in their thirties, but multiple injuries to his left knee and severe pain eventually brought Vargas to the office of Dr. Geoffrey Westrich, Co-Director of Joint Replacement Research at Hospital for Special Surgery.

“I had my first knee injury playing football when I was 17,” Vargas explains. “I had arthroscopic surgery to repair the torn meniscus cartilage, but within a month I tore it again.” After a while, he hurt the same knee again. Those injuries, and a total of four surgeries in a six-year period, did a number on his knee. Arthritis set in, and he was in pain most of the time.

“Before knee replacement surgery, it got to the point where I was unable to lead the life I wanted to live,” said Vargas, who is featured as a design assistant with style and a sense of humor on “Shop this Room.” In the show, Vargas runs around on shopping trips, carries furniture and rugs, paints walls and refinishes furniture. In one episode, the good-natured designer uses himself as a human tape measure, lying down next to a console table to measure its width against his six-foot, one-inch frame. The show, which airs Saturdays at 8 PM, showcases the talents of Danielle Colding, the winner of HGTV’s Design Star competition.

Vargas opted for knee replacement surgery almost a year ago to relieve his pain and resume his active lifestyle. At age 34, he’s one of Westrich’s youngest total knee replacement patients. Westrich, an Associate Professor of Orthopedic Surgery and specialist in knee and hip replacement, is also seeing more people in their 40’s who refuse to be sedentary and want to return to an activities they may have been forced to give up.

“Clearly, times have changed regarding our treatment of patients with knee and hip arthritis,” Westrich says. “In the not-so-distant past, most younger patients with advanced arthritis were told to live with the pain or cut back on their activities, and wait until later in life to have joint replacement. Many younger patients, including Barry Vargas, are still told to wait, despite the fact that their quality of life suffers.”

Joint replacement is still a major operation that requires extensive physical therapy, but lucky for Vargas, patients now have more options. And many are choosing to have the surgery sooner, rather than later.

Newer techniques such as minimally invasive knee and hip replacements, partial knee replacement and improved implant designs have changed the way many orthopedic surgeons look at joint replacement, according to Westrich. “The newer implants are expected to last more than 20 years, and they give patients a better range of motion, so it’s easier for them to bend their knee. Overall, the prosthesis feels more like a natural knee.”

For the pain relief alone, almost all patients will tell you a successful joint replacement restores quality of life, according to Westrich. For patients able to get back to athletic activities or jobs that require a lot of running around, it changes their lives dramatically.

When people are affected by arthritis, their general health can suffer. “People tend to become ‘couch potatoes’ because they can’t do as much. First they give up sports, because it’s too painful to participate, then they become less active overall, and it’s a downhill spiral for many,” Westrich says. “Unfortunately, the lack of exercise and weight gain can have a significant impact on their general health and make their arthritic symptoms worse. With the proper orthopedic intervention, we are now able to relieve their pain and help them get back to a healthier lifestyle.”

Six months after knee replacement, Barry Vargas was back at the gym using the elliptical machine and weight lifting. He says he wants his knee implant to last, so he is going to stay away from high-impact sports.

“It’s gratifying to see Barry get back to a job that requires him to be on his feet a lot, able to carry furniture and meet all the demands of his position, pain-free,” Dr. Westrich said. “He’s a talented individual who surely has a bright career ahead of him.”